All Internet sites operating within .za DNA top level domain name must have a landing page with a visible link to www.sacoronavirus.co.za

Disclaimer: I'm only commenting on migration from subversion to git, as I found the git tool chain to provide you with a paradise of tools to use, once you get to know them, which also happens to make a developer a happy developer. Bazaar is right out there with the rest of the DVCS's but my GPS points to git as a primary weapon. 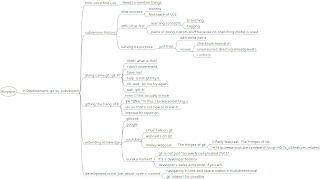 Some time has passed since I tried git for the first time, and since slowly getting the bigger picture, I just have to mention a couple of things.

As I recall, it was not a speedy process to learn subversion. It took a couple of months to be exact, the main reason for that being that I did not use and have any knowledge of VCS back then.
Subversion can't really be bad-mouthed since it does what it needs to do. Sure, it has pains and issues that one comes across from time to time, but besides that, it's OK for basic usage. The main issues I came across are checksum mismatch, unversioned directory already exists and resolving conflicts. Oh, and the biggest pain I have with subversion is how it pollutes your entire project structure with hidden ".svn" directories. Recently we struggled with permission errors and I'm certain all this hidden directories contributed to the abuse.

Along came git, after several attempts. The first few tries did not prove to be that awesome, due to the steep learning curve. My complains on git's learning curve is short-lived as I really found a home with it. My steps were roughly something like this:


The birth pains. Then things come together as you learn how everything starts to fall in place and you play with the git-svn bridge. then it's a case of:

And then by repetition one's understanding and use of git improve. But just by using it you won't get anywhere as well. My journey took me all over the place, google, youtube, github, gitbook, webcasts, cheat-sheets, presentations, whatever I could lay my hands on. In the end, my time was not wasted. It was a great investment in learning a great tool that is made for the job of coding.
I had an actual eureka moment while watching an O'Reilly webcast on Youtube, O'Reilly Webcast: The Fringes of Git where they went beyond the basics of Hello World! in git. I realised that once you get over the first mountain in the learning curve, there's hope. Git is not just another DVCS that tries to be completely different, it's a DVCS that makes your life a breeze! It really is a Swiss Army knife! - Fast, as you don't need the network every time you need to do a commit and or branching. Git grep is magnitudes faster than conventional grep in the terminal, since it uses the indexed information to search for your query. Secure since it uses sha1 hashes to ID your commits and you can sign off on a commit using your GPG key. You can travel though time using reflog, which you use to show the journal of all your past git actions. Informative because you have access to the project's entire commit history, without the need to fetch data from a server.

I know this is not much, but I'm still exploring. What I've listed here is the parts that grabbed my attention and showed me why git is really that awesome.
git subversion version control

Popular posts from this blog

Alright, so I am an atheist/agnostic/freethinker/secular humanist. I don't know what to say really. But I do feel that most people close to me would expect an explanation. However, I am not going to explain myself, but rather try to describe how I got where I am - something like a mini biography, if you would. Growing up Growing up I had an inquisitive mind. Call it a form of ADD, but I wanted to know everything there is to know about everything. How does this work, how does that work? Why? Why not? But why does it work like that? We had a set of books at home, called "Die Skatkis Reeks" (translates to "The Treasure Chest Series") and in hindsight, the books that covered natural science and technological advancements appealed to me by magnitudes more than the other books. I slurped up the content, learning about historical development such as the vehicle engine, steam engines, rockets, ancient warfare, mechanics, geography, biology, wind, pressure,
Read more

April 08, 2012
Hmm. One would say that I don't seem active on my blog. I'll be a liar if I say otherwise. It's just been hectic at the office and you know, it's not a great idea to write any posts when you are not inspired. That changed for today! I feel like writing a blog post again, and I need to do some catching up on what happened in the meantime. My last post was on good development practices and using distributed version control, in the form of Git. It's close to a year now since I started using git, and I got really comfortable using it at the office, although we use a central repository in the form of subversion. Unfortunately I had to switch back to subversion this past week, and I have to say, it's hell, waiting for updates and committing. But I can't really use git like I used to, since the subversion repo is set up wrong in that multiple sub-folders are used for individual projects. Thus, you'll have revision numbers following on each other across di
Read more

Playing nice with other kids on the block - Using Git in a Subversion environment.

Setting the stage One of the frustrations for users that had the Git-epiphany is that long after they start to use Git, they will be locked down to environments where Subversion still lurks in the dark shadows, causing trouble, sleepless nights, and crying yourself to sleep. "The tool-set change needs to be taken into consideration" "But we have Subversion" "Why change something that already works?" "Who cares if you don't have connectivity to the repository? I'll sync when it is back up." "But my IDE has local history, why do I need another tool that keeps track of the entire history?" "I don't mind going to have a coffee while operation x-y-z is running on Subversion" Branching? Who needs branching? I don't bother entering commit messages because I like to peeve my colleagues by forcing them to go through commits with diff compares to find some changes. Our team don't have the time to sp
Read more